Mysterious corridors, delicious cheese cake in Kazimierz and green bike routes. Having visited all the must sees in Krakow, it’s time to taste this very European city from within.

We can get all necessary information about Krakow’s traditional top places to see from the information points. Here you have some tips for visiting interesting places in that southern Polish city that are rarely mentioned in guides. “Incredible in Krakow are some paths in the centre of the city overgrown with grass. Lots of people, even those living in Krakow, have no bloody idea about them. There is one, totally overgrown and green. It’s got a green bump made of stones in the middle.” says Piotr Lewicki, architect.

First of all: Kazimierz 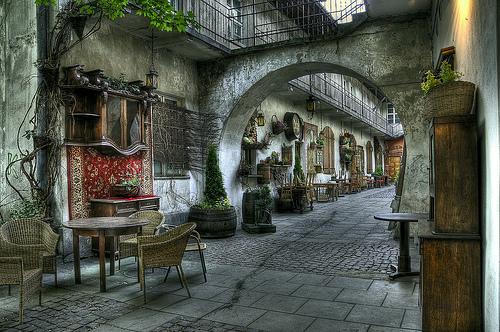 No matter if you are either Erasmus student in Krakow or three-day visitor, Kazimierz – the old Jewish district – is a must see. Beginning the day with perfect latte and delicious cheesecake at Alchemia, would be a good start to the scratched and gloomy, but extremely fashionable, artistic and vibrant district. It is here where Krakow’s bohemia meets. Nearby Alchemia you’ll find an incredible café called Les Coloures, wallpapered with posters from French movies and musicals. But the best time to go to Nowy Square is on Saturday morning. You will be amused by a market smelling of fresh fruits, vegetables and old books. From there it’s not far to the picturesque Podgórze, another interesting district, with an architectonic ally intriguing church and a mysterious mound. It’s here to say that in Kraków there are four peculiar hills, mainly prehistoric and artificially made, some of them even by the Celts. If you want to have a perfect overview of Krakow – those are the best places. 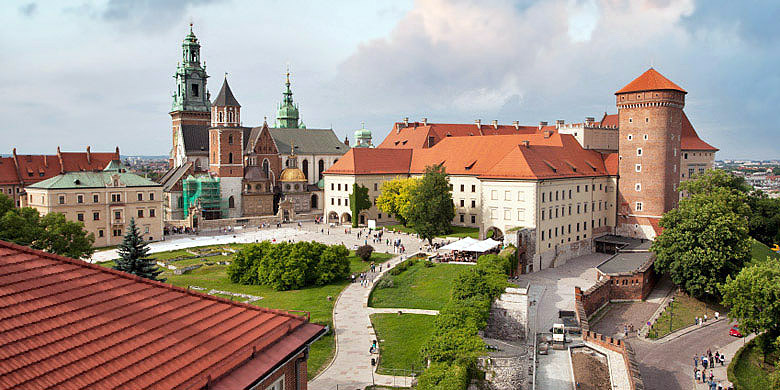 Kraków is a typical medieval city, with streets situated perpendicularly and parallel to the biggest and most beautiful market square in Europe. As a city left untouched during World War II, Kraków is now full of monuments. Thus the city is a great monument of European culture. Not only the medieval history is evident: in Nowa Huta, a district built in socrealistic style you can have a back-to-communism trip, visiting places, clubs and even the typical flats of those times. The really interesting fact is that in Krakow sacrum meets profanum in a very special way. There are about 120 churches with great history and about 500 clubs and pubs in the neighbourhood. It is lively and crowded with thousands of students. As we are in the old centre, it’s worth dropping in to Café Camelot for excellent cherry liquor and to go and see fabulous Camelot Cabaret on St. Thomas’ Street afterwards. If you are lucky enough you may also be allowed to see Krakow from the St.Mary’s Church tower. Going around the market square, you should go for another liquor in Bunkier Sztuki. But there is one place that shouldn’t be missed in any case: Massolit Books, a marvellous library-café, where you can sink into reading books all day long. Bored with English-language books? Then just go around the corner and find PUNKT. You will love those old cinema chairs you can buy there!

The piano, bike and Europe

What’s absolutely inspiring in Krakow is the fact that thousands of young Europeans studying at Jagiellonian University, one of the oldest universities in Europe. Krakow has an unremarkable European spirit. Although the public transport is not as comfortable as in Berlin or London and although still, unfortunately, you might have some problems at the train station in that pricy city, you will be amazed how much it’s worth its price. Nowhere else you will meet such an amount of creativity and nowhere else you will stay in a hostel run by a talented conductor that will give you a piano concert. And when you are fed up with the traffic– use a bike, the most useful and pleasant way of transport in Krakow. Here we can really feel like having Europe in our pocket. Not only because Kazimierz has lots in common with Berlin’s Prenzlauer Berg or Lisbon’s Alhama, or because standing in front of St. Peter’s and Paul’s Church makes you feel like being in Rome in front of Il Gesu or having breakfast at Les Coloures takes you directly to Paris, but mostly because here European ideas are fully supported by young people spending their free time on intercultural projects and youth exchanges. Still don’t know where to spend your Erasmus year?